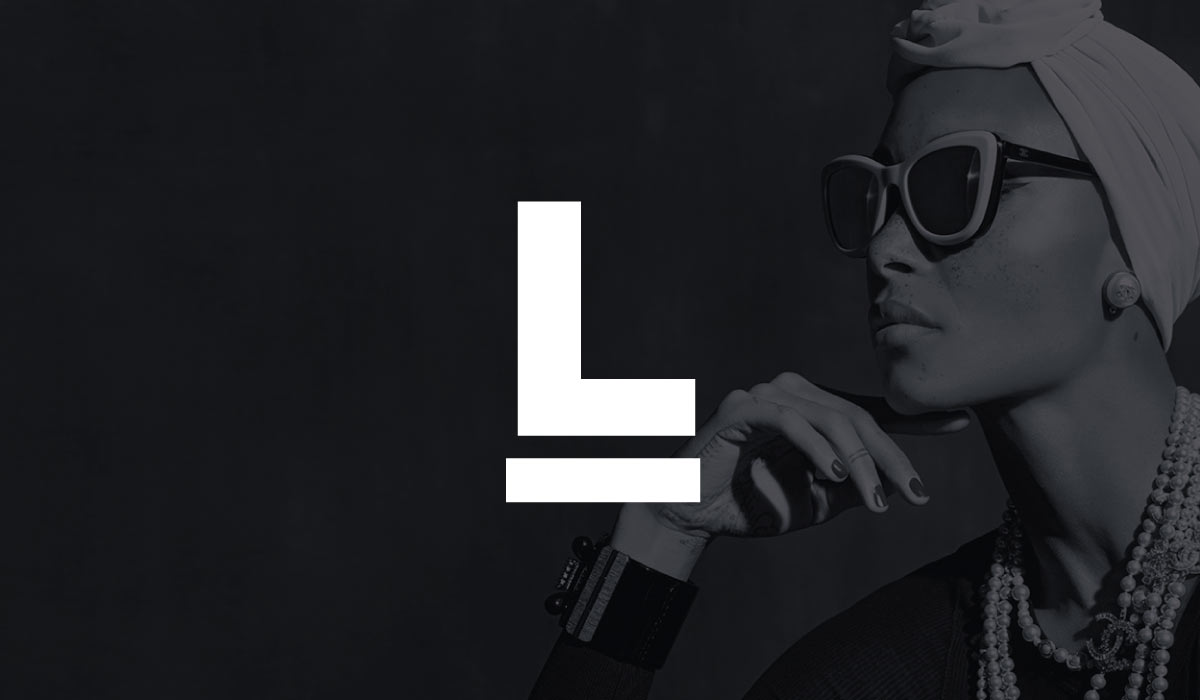 LA Eyeworks were the It Girl of designers in the 90s, visionaries, trailblazers whose fun, out-there frames displayed a passion for experimentation, a spirit of play. Founded in 1979 by Gaye Garadi and Barbara McReynolds, this small Los Angeles opticians with a shop on Melrose Avenue soon built a brand around its lively, vivid approach to eyewear design. They were greatly helped by endorsements from the cool and connected, and snappy catchphrases like, ‘A face is like a work of art. It deserves a great frame.’ They are fabulous spectacle makers who see eyewear as the beautiful object, the beautiful thing, not an appliance or a mere unit to be shifted. 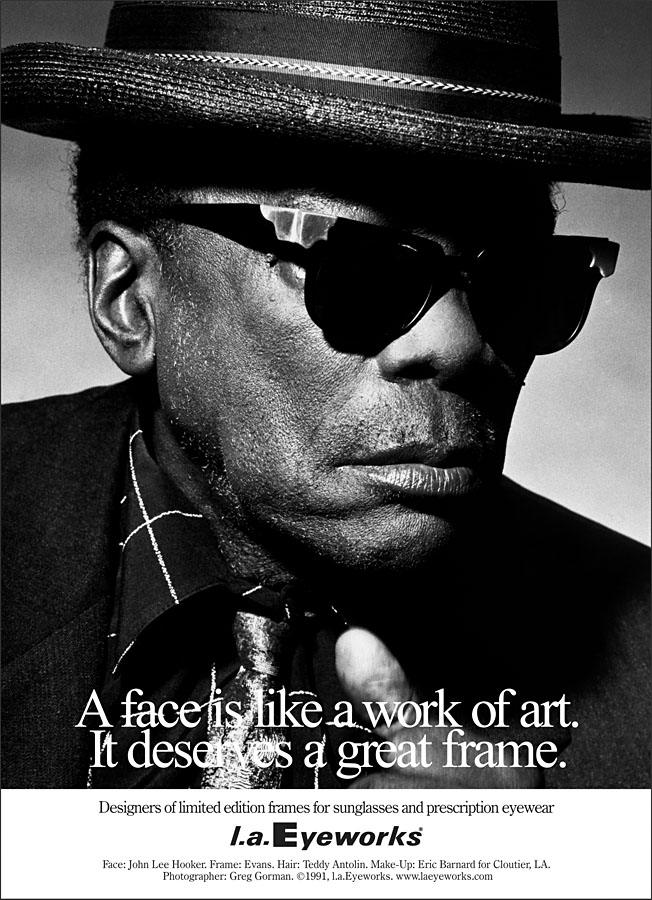 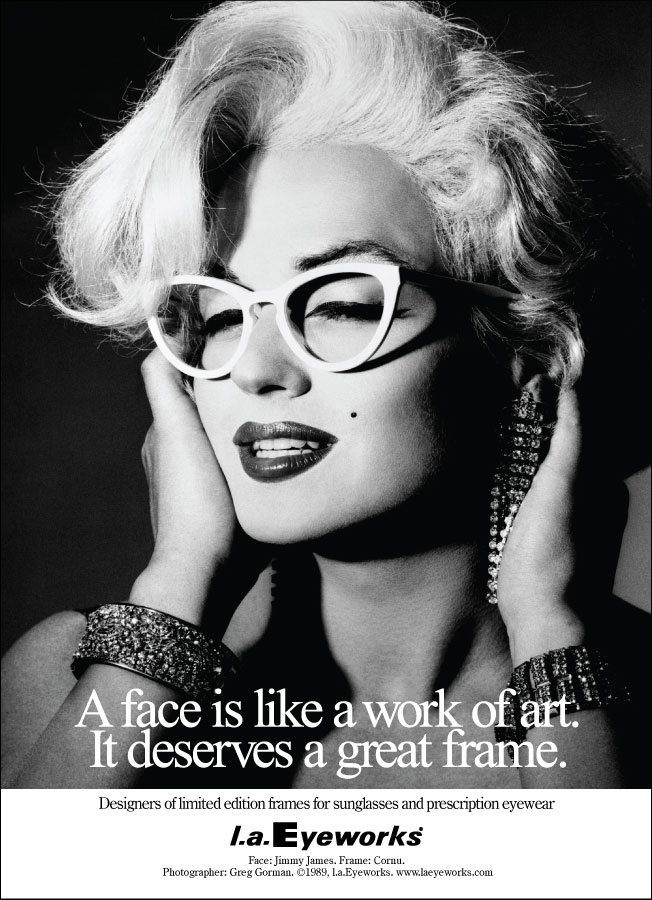 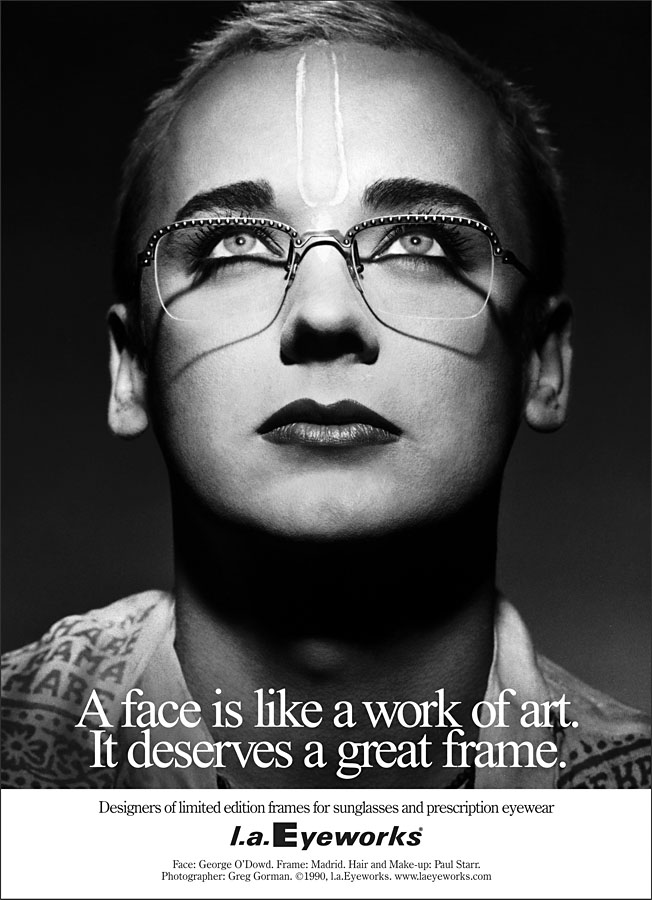 Lafont is a ninety-year-old French eyewear brand that has its origins in a famous shop, founded in 1923 on the Rue Vignon, Paris. Known for their chic, typically French eyewear, Lafont is a lovely example of the long-lived, family-run optical business. Their emphasis on the artisanal over the mass-produced reminds me very much of LA Eyeworks. Lafont are another of the people I love to work with. We have the same passion for eyewear style, the same nod to the beyond, our ethoses overlap, commingle. Our primary drive is to work with beautiful objects, beautiful things. It’s a lifestyle choice, not a business decision to devote yourself to the making of beautiful things, to live by your passion, to bring to life wonderful things in which the making of money is a secondary, an almost trivial concern.

Another iconic wearer of glasses, John Lennon’s signature wire-rimmed spectacles were in no way extraordinary. They were standard issue NHS frames made by Algha. In the 70s, if you were cool, you peeled the plastic covering from your NHS specs to expose the wire rim, which is what Lennon did. In opting for simple wire frames at that time available for free to everyone, Lennon contrasts with the statement eyewear habits of Elton John and Elvis. It’s not that it isn’t a statement, only that it’s a statement of simplicity, like that suggested by Ghandi’s basic eyewear. In the 70s, the love and peace years, Lennon used his glasses to say he was one of us: modest, unpretentious, frugal, not in any way ostentatious. It’s curious that I used the same round frames when I styled the Harry Potter films. 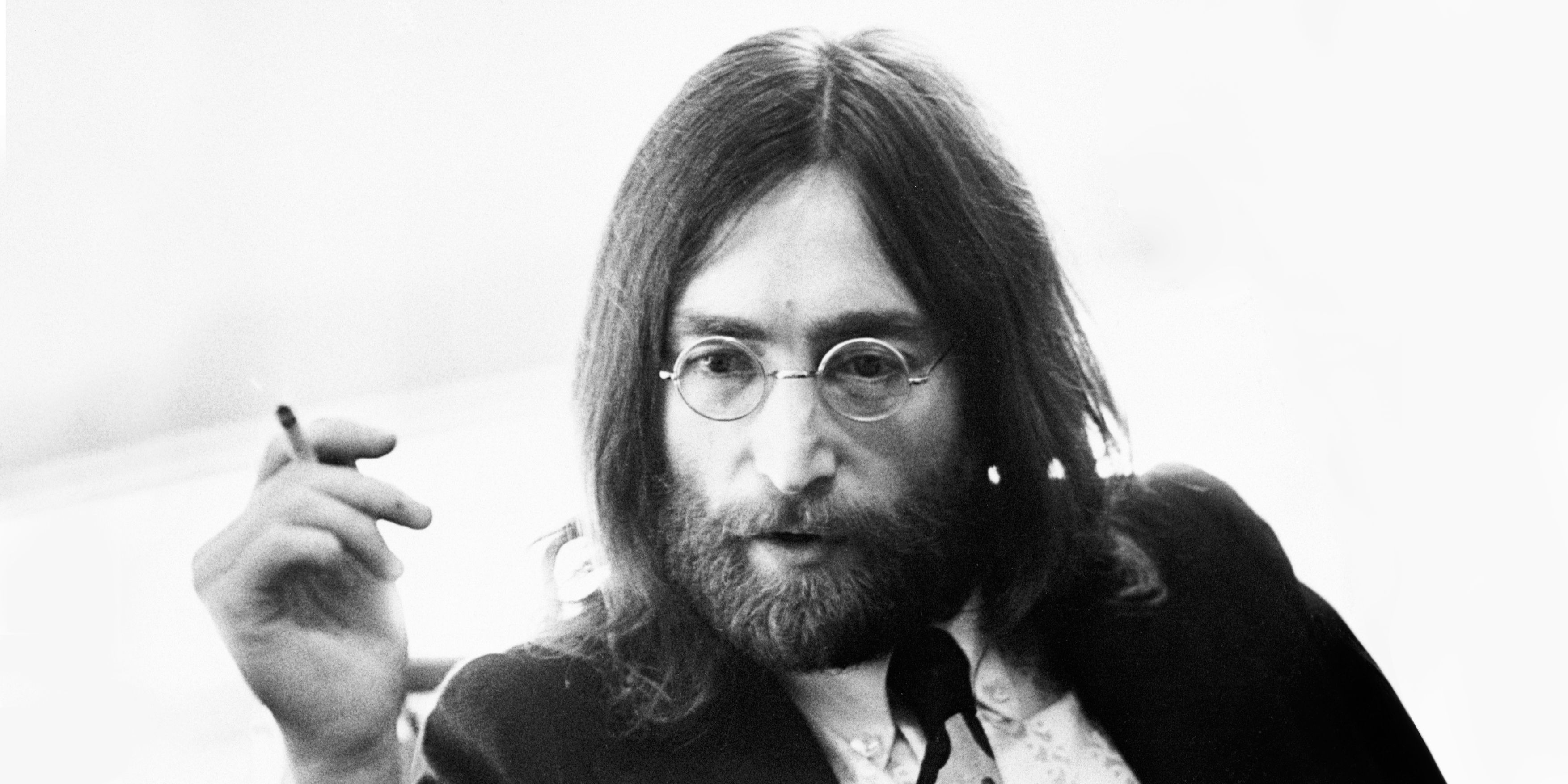 In the 80s, Sophia Loren had her own range of eyewear. They were massive and massively popular. To this day, you can still sometimes see a lady of a certain age coming out of Harrods wearing Sophia Lorens with their tell-tale huge frames, graduated tint and swooping drop-sides. I very much doubt Sophia had anything to do with their design but she was crucial to their presentation as an aspirational brand, something to be seen wearing, eyewear as a manifestation of lifestyle. She may also have been the very first person to do this, put their name to a brand of eyewear to give it a marketing boost rather than the object trading on its design qualities or price or exclusivity alone. 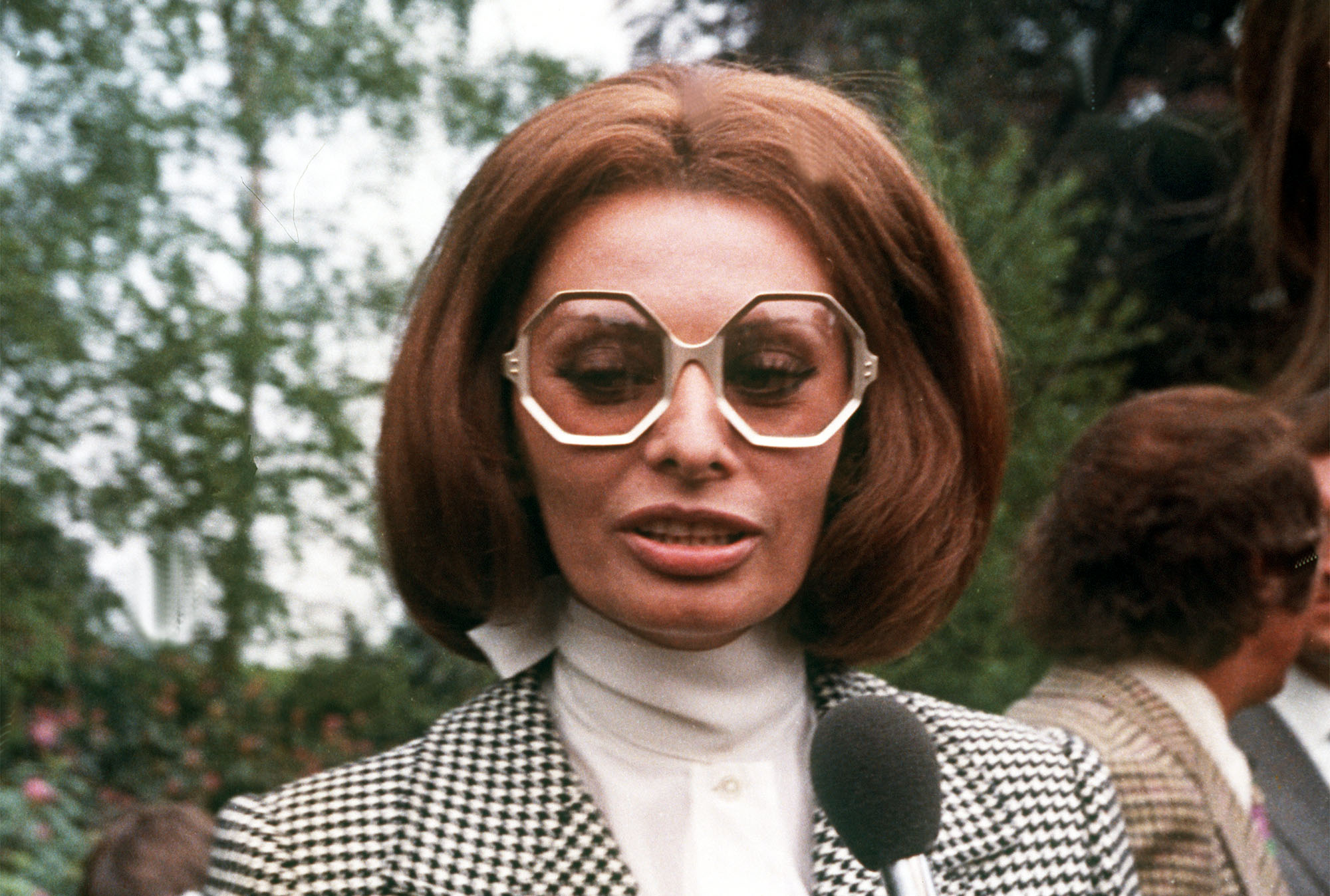 No discussion of contemporary eyewear can avoid Luxottica. Luxottica seem to own everything, control everything. The biggest eyewear company in the world, they are simply unavoidable, the big squid, the fat cat. It is impressive, in a way, that world domination was all part of a plan, the impossible dream of one man who started at the bottom and worked his way up.

In 1961, Leonardo Del Vecchio established Luxottica in Agordo in Italy with one factory. The plan was always for Luxottica to become a world leader. This was achieved primarily by vertical integration, acquisitions up and down the eyewear supply chain, the owning of everything, the opposite of specialism, of artisanship, the buying of rather than the making of. Luxottica may have started in the manufacture of frames, but soon expanded into the design, distribution and retail of spectacles.

Ray Ban, Persol and Oakley have been subsumed into Luxottica. On the high street and in the malls, retailers, like Lenscrafters, Sears Optical and Target Optical are Luxottica. Luxottica is certainly the largest retailer of eyewear in the United States and has thousands of outlets elsewhere. Chanel, Burberry, Prada, Armani, Versace, Dolce and Gabbana and DKNY eyewear are made by Luxottica, as are many other fashion brands. In 2017, Luxottica merged with Essilor, the biggest manufacturer of lenses in the world, in the process becoming a company worth €57 billion. The whole idea is to mass-produce spectacles cheaply, more cheaply in Italy now than in China, to create something close to a monopoly, a self-perpetuating, money-making machine that just happens to be based on eyewear. It could easily be land, or pharmaceuticals, or underpants. Whatever it is, it’s not me.

Luxottica is a great business model but not a great example of how to live. I don’t stock any Luxottica products in my shop. I still primarily want to work with my passion, and collaborate with the passion of others to make and provide beautiful objects, beautiful things that you’ll treasure and prize for decades, that you’ll feel fabulous wearing. I still want to be an actor in the romance of a well-engineered, stylish piece of eyewear. This isn’t a business model. It integrates neither vertically nor horizontally, or this way or that. It is not about the unit cost or unit-shifting. It is simply the reason to be. 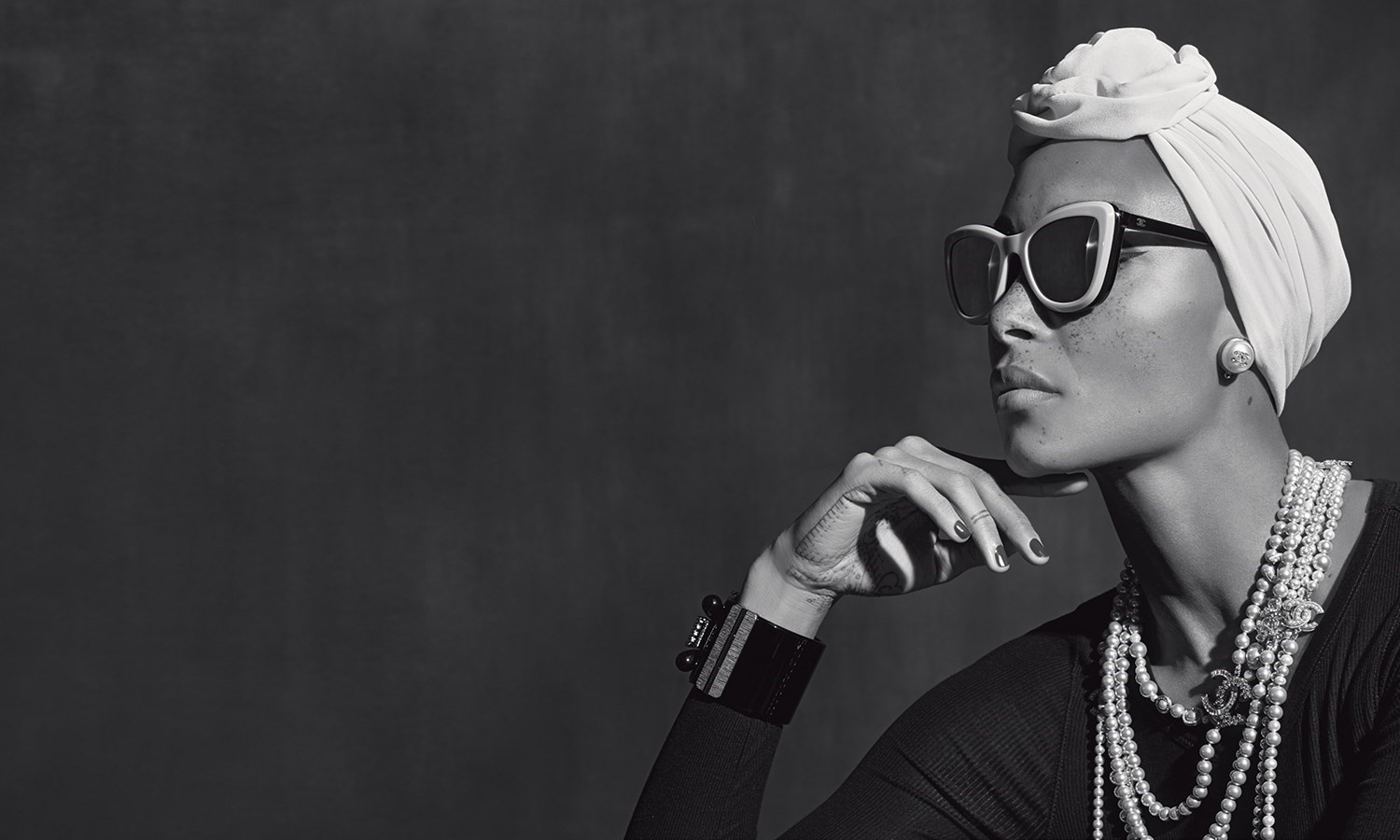